To mow tall crops such as thatching wheat or Norfolk reed with a scythe you need to fit a cradle to hold the straw from falling back over the snath as you mow. 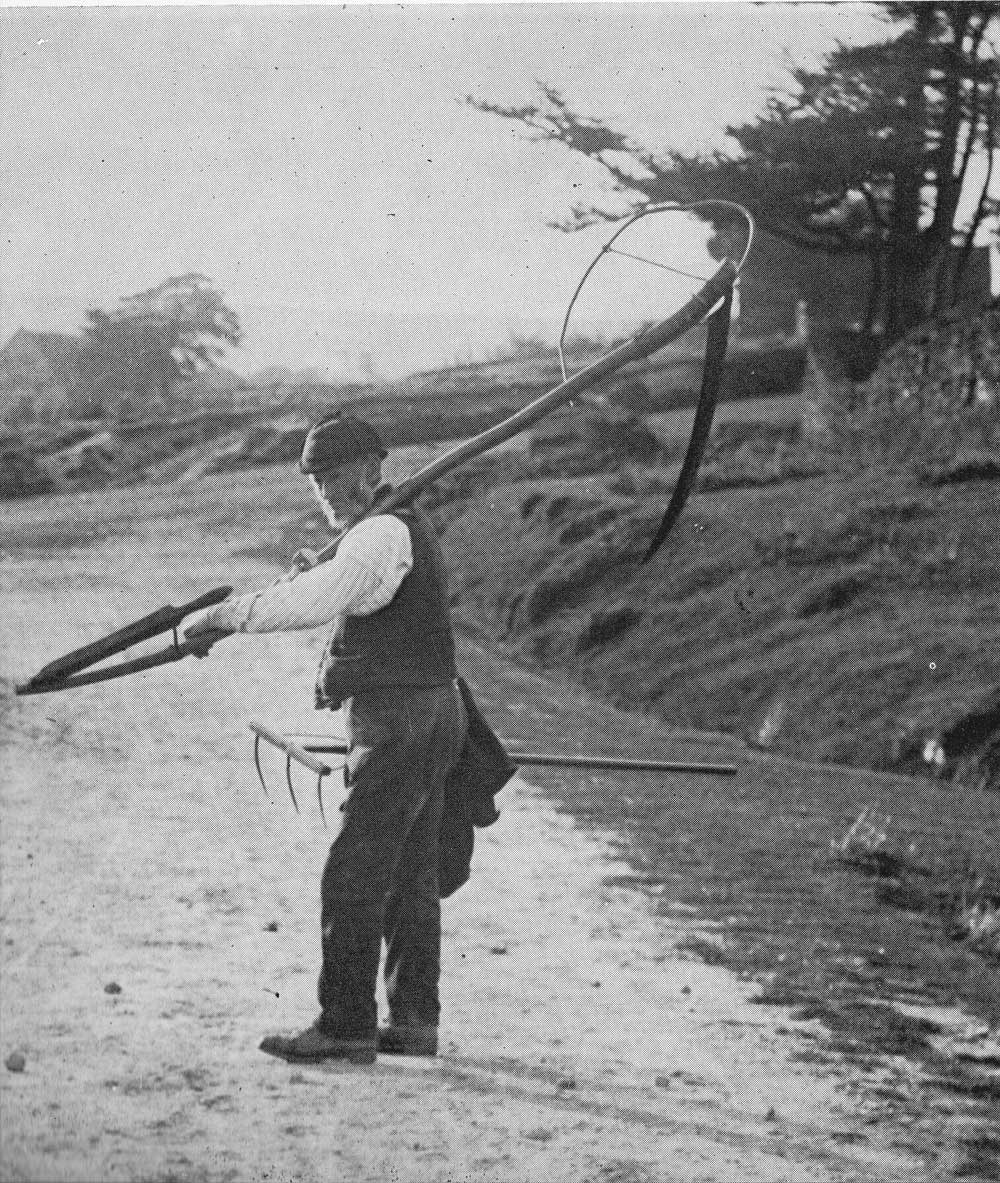 In most old photographs of reed cutting or reaping corn the scythesmen have simple improvised bow cradles fitted, made from sticks cut from the hedgerow and bound to the scythe with string.

I have been experimenting with different styles of bow cradle over the last few years.  A basic bow cradle works well in stiff Norfolk reed, especially if fitted with a ‘pricker’ (peg).  It was not as effective however at John Letts Lammas mow last year – it did not lay the corn neatly so as  to make gathering and tying easy.   I have looked to develop the design, but still keeping with the bow cradle concept rather than the more elaborate ‘turkey wing’ designs.

In a book: ‘Life in the moorlands of North-East Yorkshire’ by Marie Hartley and Joan Ingilby,  I came across a neat design that looked worth trying – if only on the basis that if it was a traditional pattern- so it ought to have some merit.

In this design the bow is made of thin hazel, willow or a briar with its thorns rubbed off, and is held in place and supported by a thin metal rod called ‘a standard’.

cradle support to support and hold a bow on a scythe

The standard is fixed to the scythe using the blade clamp and so is easily fitted or removed as needed.  I thought that this could work well with the Austrian scythe if I could find a friendly blacksmith to make one.

Fortunately at this years Eastern counties scything weekend Simon Damant invited Andy Window : blacksmith, artist and imaginator who was happy to put the idea into practice. 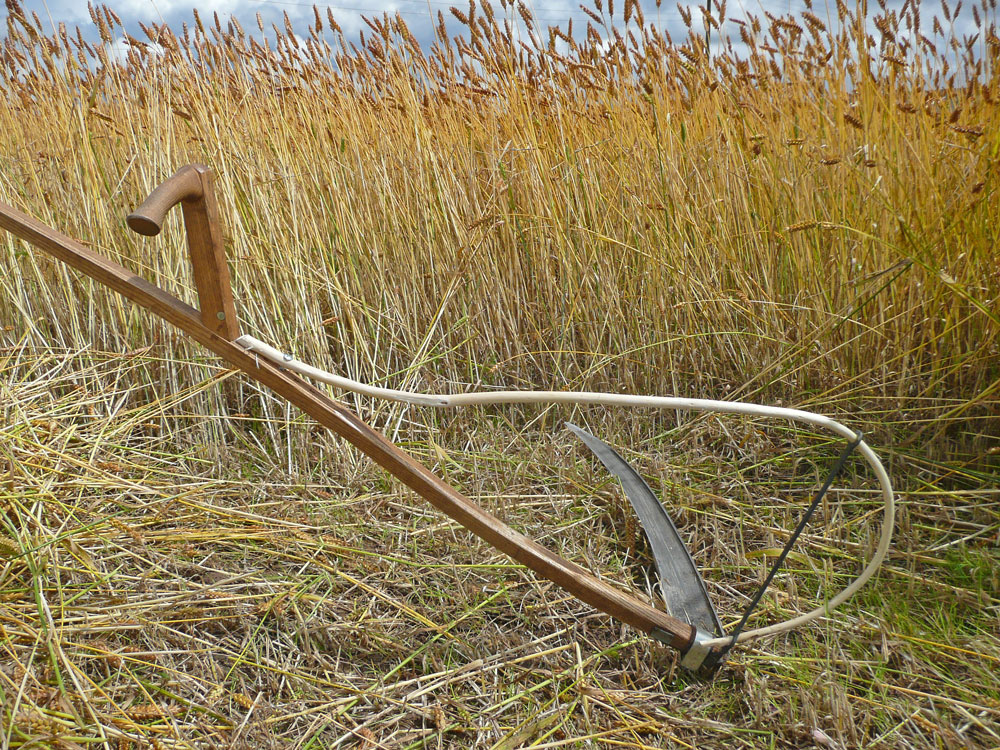 Yorkshire style bow and 'standard fitted ready for use

Now my ‘squarehead master’ wheat is approaching harvest I have been able (between showers) to give the new cradle a trial run.  I know several people will be experimenting with cradles and corn harvesting so I thought it a good time to share my preliminary observations and stimulate comment and hopefully some practical ideas in return.

Whereas with grass you mow outwards, when mowing corn it was common practice to mow inwards with the corn falling against the standing crop  As I was working alone I reverted to mowing outward to keep the corn clear of the crop.  This was OK – you just have to stoop a bit lower to gather up the sheaves.

Mowing corn is easier than mowing grass provided the corn is upright.  As the book suggests “scythe according to the wind… never push against the wind”.  There is definitely a technique to mowing the corn so it lands neatly arranged to your left – I haven’t put much footage on youtube as I have yet to master this!  If the crop leaned toward me at any point the cradle was apt to get snagged.

As to the different designs: the Yorkshire pattern having the bow extending forward of the blade did seem to snag more.  To improve things I tried to attach a string from the bow to a small ring hooked over the the blade tip (as suggested in David Tresemers scythe book) – this would not stay in place for more than two strokes – and short of drilling a hole I cannot see how it would? 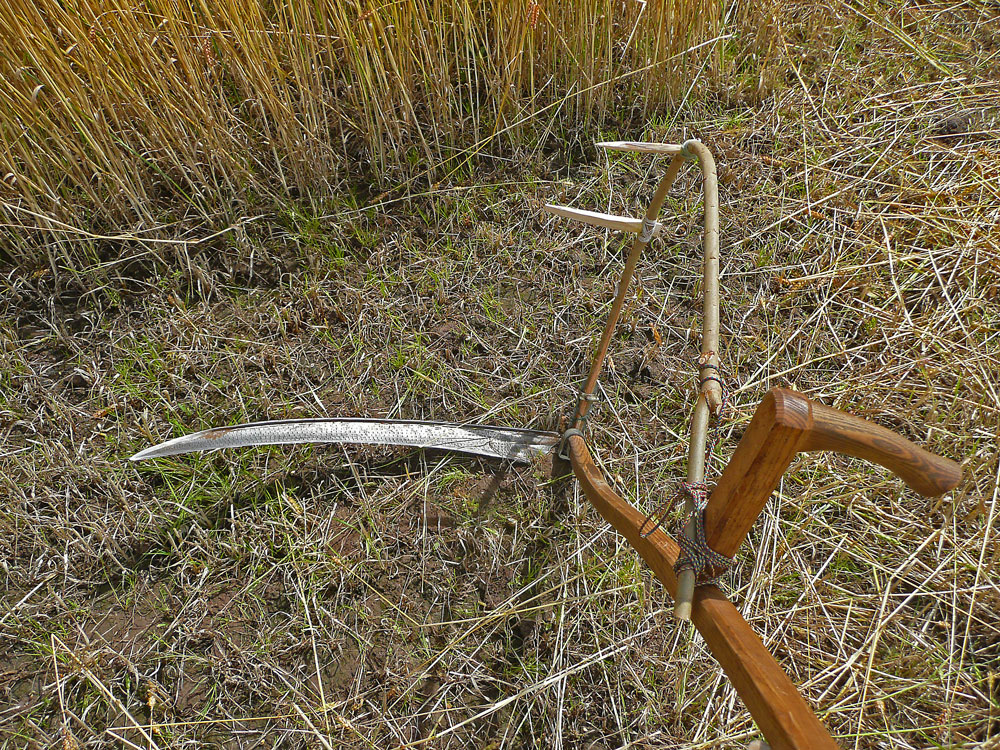 My original bow cradle, with extended prickers, worked better but still snagged if the crop was less than upright.

At the end of an hours experimentation I had mown corn that could be gathered and stooked without having to re-arrange it (as last year).

I think a combination of refinement of technique and design is still needed!

“For every three scythes you need three liers-out, three tying up and one to stook”.